RSS
← On Not Reading But Writing
On a Holy Hijab Day →

Beyond Pemberley: Powder, Patches and Proposals – A Month-long Regency Romance

I don’t think I’ve fallen in love this month, but I hope I’ve made a good friend to while away a few hours over a pot of tea. (My husband of 13 years can breathe a sigh of relief)
I used to be a little (OK, very) snobbish about light, frothy, genre novels, wondering ‘why would any intelligent reader choose to waste their time reading a novel where you already knew the ending?’ But having spent February reading (mostly) romances set in Regency England, I can now understand why.

They are not especially demanding (some days you’re too tired to concentrate on complicated plots or characterisation), they can be light-hearted (because sometimes life is serious enough), they’re set in a historical era with different manners, customs and a strict social structure (a bit of escapism can be fun; it’s not too difficult to generally visualise the costumes and context if you’ve watched even just one Regency costume drama), the romances have a happy ending (because life is usually more complicated and unresolved, doesn’t always end happily and you don’t always end up with the right partner).

One of my friends who almost solely reads Mills & Boon Regency romances described them to me as ‘easy-to-read Jane Austen’. Once I would have dismissed her condescendingly; surely I would read the ‘real’ Austen and not be distracted by such frippery? But this month’s discipline has opened my eyes. Reading a number of Regency novels in quick succession has shown me a range of writing styles, and various levels of steaminess on the conjugal front. The hero (or anti-hero; the reformation of ‘a rake’ is more fun!) and heroine marry, they behave themselves (mostly) within strict moral and societal codes and there’s lots of description of costumes, material, balls, and everyone spends at least some time in Bath.
Other random things I’ve learnt, in no particular order:

But there are so many more books I could have read: still to finish Persuasion (to my shame), I didn’t try out Galen Foley, Julia Quinn or Eloisa James (but now own at least one copy of each of their novels to enjoy another time). And I have 46 more Georgette Heyers to read…

Did I miss anyone else out?

It’s been a fun, February fling, but now onto more serious fare: ‘Nordic Noir’ for the month of March. Dark tales of murder and detection in northern wastelands. Any suggestions to add to my pile?

P.S. I couldn’t resist reading a few novels outside the monthly theme: The Dinner by Herman Koch for our reading group (odd, oppressive view of Danish middle-class life), Mutton by India Knight (an amusing story of a forty-something mother reflecting on ageing, and English middle-class life), My Sister Lives on the Mantlepiece by Annabel Pitcher (for a Read Regional event, enjoyed in one evening, met author the next day; see post ‘The Joy of a Quick Read’.) 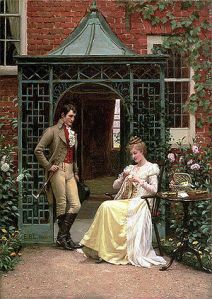 Oh, to be a Recency woman…

Posted by BookWormMum on 02/03/2013 in End of month review, Reading Themes

← On Not Reading But Writing
On a Holy Hijab Day →