Although it’s springtime, the wintry weather seemed to be blasting us from the North throughout March, and so my reading theme chimed with the Nordic-based weather front.

A librarian friend jokingly suggested that I should spend each month dressed according to my reading theme; she was particularly looking forward to last month’s Regency theme with empire-line dresses, fans and smelling salts. I disappointed her, but suggested this month I might appear in the library wearing the same, cable-knit jumper, unbrushed hair and a permanently surly expression. I resisted.

And so I started with Henning Mankell. I have had every intention of watching the TV series (both the original Swedish and BBC versions) but only seem to have found the time to have watched one episode of one BBC series. Similarly, I had accumulated a few of Mankell’s crime novels and looked forward to ‘meeting’ Wallander in his original form.
I started with Sidetracked, only because it’s the earliest (fifth) in the series I have on my shelf. Faceless Killers is somewhere on my Kindle and The Dogs of Riga is issued to me from my local library.

Wallander is as darkly dour as I had been led to expect, with a typically troubled personal life. but in this novel, he seems able to embark on a new relationship, cares for his dementia-troubled father and has genuinely good working relationships with his team, I underestimated the facets of the character at first. The writing is good, introducing a few strands of the story in the first few chapters, describing a visually dramatic suicide early on, killing a character we’d been ‘observing’ in minute detail only pages before, and, in particular, beginning the narrative inside the head of the murderer. Of course, none of this is new, but these techniques quickly and effectively create psycholocial suspense and intrigue which might take longer or not be possible in a more ‘plodding’ crime narrative. The action takes place in particular geographic locations; the Swedish geography is described in detail; the MidSummer setting of Sidetracked provides an interesting counterpoint to the self-immolating suicide and the psychological darkness of the perpetrator. 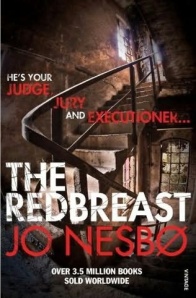 I confess, I like Harry Hole. Jo Nesbo’s The Redbreast has introduced us and I’d like to spend more time in his company. This thriller is longer, denser and more complex than Sidetracked, the narrative jumping between Winter 1999-2000 (including a visit from the US President to Sweden) and events on the battlefield and camp hospitals in the late 1940s. issues of loyalty, justice, identity, love and retribution resonate through the years. Gripping and chilling.

Harry Hole is, as expected, a character in conflict; an unsatisfied personal life, unresolved issues, hidden depths waiting to be explored in further investigations. He has a network of relationships, both personal and profiessional; he antagonises and infuriates colleagues and superiors. And has a very particular dress sense. (He reminds me a little of a Swedish Rebus in Ian Rankin’s Edinburgh-set novels)

Do you ever hang onto books ‘in case you might get round to reading it one day’? I do. I was reminded of this when I picked up my copy of Miss Smilla’s Feeling for Snow when a charity shop receipt fluttered out. It was dated 2001. At least the book’s now off the shelf, being read. It’s a downbeat, dour, snow-laden mystery, although I’m only four chapters in; I doubt it’ll become an all-singing, all-dancing up-beat affair though. If, indeed, I finish it; it’s not gripped me yet, sadly.

The wonderfully titled The 100-Year-Old Man Who Jumped Out of a Window and Disappeared by Jonas Jonasson was, by happenstance, March’s reading group choice. I was looking forward to this best selling, quirky story of a centenarian’s journey (both literal and metaphorical) through his life. However, I didn’t warm to Allan Karlsson’s on his Forrest-Gump-ian adventures but I did make it to the end (too late for the group’s meeting) and was amused by some of the more bizarre situations he found himself in.

(A further confession: the final few days of March found me gripped by Gone Girl by Gillian Flynn: apparently, ‘the addictive no.1 US best seller that everyone is talking about’. It was gripping; a rollercoaster ride of a thriller, with many twists and turns, dips and peaks which kept my light on well past my bedtime.)

I ran out of time for the further adventures of Lisbeth Salander, any of Anne Holt’s crime thrillers, John Ajvide Lindqvist or the novelisation of The Killing. A slightly disappointing reading tally this month, certainly compared to last month’s Regency romp, but my reading appetite is whetted to venture north again to hook up with Harry Hole, Lisbeth Salander, Kurt Wallander and Oskar & Eli. Hej da…

Posted by BookWormMum on 03/04/2013 in End of month review, Reading Themes