Review: The Peculiars by Kieran Larwood

Fancy reading a story about a Victorian freakshow?

Want a tale of hair-raising adventure, a smattering of steam-punk inventions, a break-in to The Crystal Palace, a quick look at the Great Exhibition of 1851 (in the dark), get your hands on Faraday’s machine and even see the Ko-i-Nor diamond?

This is the story of Sheba, a ‘wolf-girl’ who is part of Grunchgirdle’s very small, shabby travelling freakshow.

‘Everyone said she had a lovely head of hair.

And face of hair. And hands of hair.

In fact, she was covered from head to foot.’

Sheba is ‘exceptional’, with excellent olfactory skills, a talent for lock picking, and is literate. But the only qualities people see are her wolf-like appearances.

She is sold by Grunchgirdle to the equally descriptively named Plumpscuttle for his (slightly) larger freakshow. Sheba joins his caravan to London – the sprawling, stinking Metropolis – where they sit each night to be gawped at by paying customers.

Sheba joins the ‘cast’ including Monkeyboy, Gigantus, the ninja warrior Sister Moon and Mama Rat. She is accepted into ‘The Peculiars’ with affection and appreciation, 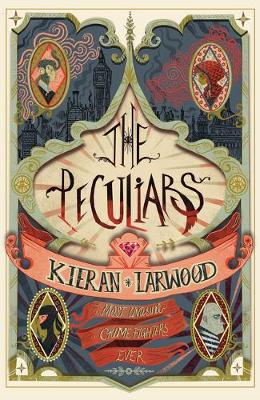 finding a sort of family for the first time in her life. The team might appear terrifying or unusual on the surface, but prove to be big-hearted, sensitive and brave friends.

When ‘Mudlarks’ begin to disappear, The Peculiars investigate. They are pursued by an evil woman and her devious accomplices, leading to the thrilling adventures mentioned above.

You can even read a little of the work of Famous Lady Novelist, Gertrude Lacygusset!

There is genuine peril within. I found myself worrying about the characters, racing through the final chapters as the team solved the mystery and foiled the ‘baddies’.

Another excellent book from Chicken House publishers. Although not actually a new book – it’s a reissue from 2012, originally titled The Freaks – it’s a great read. And the new cover by Karl James Mountford is gorgeous!